Tobacco-free for years, he fell ill

Barbara Phelps could scarcely believe her eyes.
The scan of her brother's brain showed nearly the entire center was filled by a mass of cancer, which had spread from his lungs.
Philip Cullings had gotten good at hiding his ailments from his sister. But now, he didn't have much time.
That was in April, 12 years after his original lung cancer diagnosis - which was made more than two decades after he quit smoking.
The 72-year-old North Fort Myers man died in July at his sister's home, his 2007 Engle lawsuit against big tobacco pending.
"I believe smoking was a choice he made, but would he have started if he knew how it would all end? I truly don't know," Phelps said. "At the time when he started, it was the cool thing to do, and there was no bad stigma to it, no health risks we knew of."
For decades, Cullings smoked heavily. He was a handsome Air Force crew captain with a square jaw, olive skin and bright smile, his sister recalls.
In his teens, he, Barbara and their friends would climb into the rowboat docked at the lake behind their Michigan home and row far enough out of their parents' sight to smoke.
Philip was soon lighting up at every opportunity. He continued until he was married and in his 40s. Then suddenly, in a move that puzzled both his wife and Barbara, who both smoked, Phil announced one day at lunch he was quitting.
"He just got some Nicoret gum and the patch and just quit," Phelps said. "And he turned into the biggest advocate for quitting you've ever seen. He actually drove everyone kind of crazy with it. He would preach to anybody that would listen about how bad it was."
For the next 20 years, he embraced the fresh, smoke-free air of the Florida outdoors, especially traversing the waters on his boat.
Then came lung cancer.
"It was hard to believe so long after his quitting," said his sister.
The next year, it had spread to his brain.
While he appeared to have beaten it, Phelps said he was never quite the same, and his judgment appeared to have been affected. He suddenly divorced his wife. He abruptly moved to Kentucky, only to move right back. Once easy-going and gregarious, he became stubborn and reclusive.
"The last 10 years were very difficult because he never quite regained his strength, and I think his brain was damaged, so emotionally, he just wasn't the same Phil," his sister recalled.
It wasn't until earlier this year, though, after a fall, that Phil was brought to the hospital and given an MRI, revealing both the lung and brain cancer were back - and terminal. Suddenly, her brave older brother was afraid to go to sleep.
Painful as it was to watch him fade, Phelps, who herself suffers from emphysema, never agreed with her brother's lawsuit. She compared it to suing a knife company after being stabbed. But Phil believed tobacco companies should be accountable for what he said were deceitful tactics to hook new smokers.
Barb hopes her brother's death serves as a warning.
"He suffered so bad," she said. "I can honestly say our lives would have been different if he had never smoked."
Tomado de
http://www.news-press.com/article/20110927/NEWS01/109270315/Tobacco-free-years-he-fell-ill?odyssey=mod|newswell|text|Home|s
Publicado por mirada a los espacios libre de humo en 9/28/2011 07:52:00 a. m. No hay comentarios: 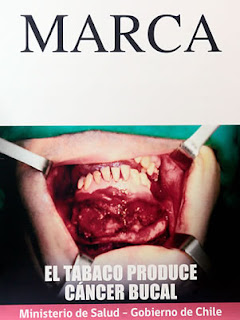 Plain packaging and other anti-smoking measures are getting Australia noticed in the global domain, Health Minister Nicola Roxon says.
The minister has returned from a United Nations health meeting in New York, where she said the federal government's plain packaging efforts had other delegates hooked.
"We had countries from Norway and Uruguay, through to France and South Africa and the US, even New York mayor (Michael) Bloomberg, all interested in what we're doing," shetold ABC Radio on Monday.
"Lots of people wanting to know if they can use our graphic health warnings.
"The number of times that there was spontaneous applause when we were presenting this at different forums is an indication that our presentation and our action is striking a chord with other nations."
Legislation forcing all cigarettes to be sold in ugly plain packets is due to pass the Senate during the next sitting in October.
Ms Roxon was disappointed that the bill has stagnated in the upper house, but added its passage was now "just a matter of programming".
Tobacco companies continue to threaten to take the government to court over the matter, but Ms Roxon said the government was not going to be scared off.
"I was also able to meet with countries that are currently being sued by tobacco companies for other steps they're taking," she said.
"It's their usual course of business.
"I'm sure that part of the huffing and puffing from big tobacco companies is that they are terrified of other countries following us."
Tomado de:
http://news.ninemsn.com.au/national/8352185/australia-takes-lead-on-anti-smoking-govt
Publicado por mirada a los espacios libre de humo en 9/26/2011 09:08:00 a. m. No hay comentarios:

Peter Lloyd
Updated September 26, 2011 21:34:27
Health Minister Nicola Roxon has returned from the United Nations, where she says ministers from around the world applauded the Federal Government's tobacco plain-packaging legislation.
If passed, all cigarette brands in Australia will be sold in olive green packaging from July 2012.
The pictures of diseased body parts, sickly babies and dying people will cover 75 per cent of each packet, and tobacco industry logos, brand imagery, colours and promotional text will be banned.
But the legislation has to pass the Senate, while tobacco companies have also threatened to sue the Government if the bill is passed.
Ms Roxon has been busy preaching about the Government's plans at UN headquarters in New York.
"There's enormous interest in the Gillard Government's plain-packaging legislation," she said.
"It really is exciting the world and reinvigorating the debate about the ways to reduce harm from tobacco.
"We have countries from Norway and Uruguay, through to France and South Africa and the US, even New York mayor [Michael] Bloomberg, all interested in what we're doing.
"I think the number of times that there was spontaneous applause when we were presenting this at different forums is an indication that our presentation and our action is striking a chord with other countries and making them look again at what they might be able to do in their own country."
Ms Roxon says there was some sense that other countries are waiting to see how the Australian Government survives the battle with big tobacco before they act.
But she says it helped that she was able to meet officials from countries being sued by tobacco countries.
"We know that this is the way tobacco companies operate, it's their usual course of business, and they sue countries and are currently doing it right now as we speak for introducing measures that we've had in Australia for many decades," she said.
"I don't think we should be scared off by threats of legal action.
"It was good to be able to compare stories for countries that are also being courageous in tackling tobacco, and we know that lawsuits is part of it.
"Some countries are watching and waiting, others are ready to take this action irrespective of what might happen in the courts."

Ms Roxon says tobacco companies are scared of the Australian Government setting a precedent with the laws.
"I'm sure that part of the huffing and puffing from big tobacco companies is that they are terrified for other countries following us," she said.
"We have a relatively low smoking rate because of our other successes in controlling the use of tobacco in Australia.
"So we're a fairly small market but certainly they don't want a precedent set."
Tobacco legislation has fallen off the program in the Parliament twice in the last two months, and it is not back on the Parliament agenda until October.
Ms Roxon says the Senate is being frustrating with the legislation.
"Unfortunately the mysteries of the Senate mean that sometimes they spend a lot of time debating when they're going to debate things rather than actually doing the debating," she said.
"I won't be the first minister of a government to be a bit frustrated about that timing, but do remember that these laws are scheduled to come into being on the first of January next year.
"We are keen for them to be passed; we have commitments and enough votes for it to pass the Senate.
"It's now just a matter of programming for it to be on. I would have liked it to have been passed last week, but the Senate was unable to reach it."
Tomado de:
http://www.abc.net.au/news/2011-09-26/other-countries-interested-in-plain-packaging-laws/2945012/?site=melbourne
Publicado por mirada a los espacios libre de humo en 9/26/2011 08:43:00 a. m. No hay comentarios: